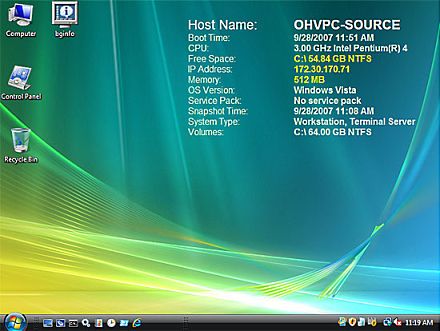 SysInternals have many kool tools if you want to explore. Here is list of few free system tools

Sysinternals Suite The entire set of Sysinternals Utilities rolled up into a single download.

AccessChk v5.11 (May 16, 2013) AccessChk is a command-line tool for viewing the effective permissions on files, registry keys, services, processes, kernel objects, and more.

AccessEnum v1.32 (November 1, 2006) This simple yet powerful security tool shows you who has what access to directories, files and Registry keys on your systems. Use it to find holes in your permissions.

Autoruns v11.70 (August 1, 2013) See what programs are configured to startup automatically when your system boots and you login. Autoruns also shows you the full list of Registry and file locations where applications can configure auto-start settings.

BlueScreen v3.2 (November 1, 2006) This screen saver not only accurately simulates Blue Screens, but simulated reboots as well (complete with CHKDSK), and works on Windows NT 4, Windows 2000, Windows XP, Server 2003 and Windows 95 and 98.

CacheSet v1.0 (November 1, 2006) CacheSet is a program that allows you to control the Cache Manager’s working set size using functions provided by NT. It’s compatible with all versions of NT.

ClockRes v2.0 (June 4, 2009) View the resolution of the system clock, which is also the maximum timer resolution.

Contig v1.7 (November 15, 2012) Wish you could quickly defragment your frequently used files? Use Contig to optimize individual files, or to create new files that are contiguous.

Coreinfo v3.21 (December 19, 2013) Coreinfo is a new command-line utility that shows you the mapping between logical processors and the physical processor, NUMA node, and socket on which they reside, as well as the cache’s assigned to each logical processor.

Ctrl2cap v2.0 (November 1, 2006) This is a kernel-mode driver that demonstrates keyboard input filtering just above the keyboard class driver in order to turn caps-locks into control keys. Filtering at this level allows conversion and hiding of keys before NT even “sees” them. Ctrl2cap also shows how to use NtDisplayString() to print messages to the initialization blue-screen.

DebugView v4.81 (December 4, 2012) Another first from Sysinternals: This program intercepts calls made to DbgPrint by device drivers and OutputDebugString made by Win32 programs. It allows for viewing and recording of debug session output on your local machine or across the Internet without an active debugger.

Desktops v2.0 (October 17, 2012) This new utility enables you to create up to four virtual desktops and to use a tray interface or hotkeys to preview what’s on each desktop and easily switch between them.

Diskmon v2.01 (November 1, 2006) This utility captures all hard disk activity or acts like a software disk activity light in your system tray.

FindLinks v1.0 (July 18, 2011) FindLinks reports the file index and any hard links (alternate file paths on the same volume) that exist for the specified file.  A file’s data remains allocated so long as at it has at least one file name referencing it.

Handle v3.51 (January 24, 2013) This handy command-line utility will show you what files are open by which processes, and much more.

ListDLLs v3.1 (July 18, 2011) List all the DLLs that are currently loaded, including where they are loaded and their version numbers.

LoadOrder v1.0 (November 1, 2006) See the order in which devices are loaded on your WinNT/2K system.

MoveFile v1.01 (January 24, 2013) Allows you to schedule move and delete commands for the next reboot.

NTFSInfo v1.0 (November 1, 2006) Use NTFSInfo to see detailed information about NTFS volumes, including the size and location of the Master File Table (MFT) and MFT-zone, as well as the sizes of the NTFS meta-data files.

PendMoves v1.2 (February 5, 2013) Enumerate the list of file rename and delete commands that will be executed the next boot.

PipeList (November 1, 2006) Displays the named pipes on your system, including the number of maximum instances and active instances for each pipe.

PortMon v3.03 (January 12, 2012) Monitor serial and parallel port activity with this advanced monitoring tool. It knows about all standard serial and parallel IOCTLs and even shows you a portion of the data being sent and received. Version 3.x has powerful new UI enhancements and advanced filtering capabilities.

ProcDump v6.0 (May 16, 2013) This command-line utility is aimed at capturing process dumps of otherwise difficult to isolate and reproduce CPU spikes. It also serves as a general process dump creation utility and can also monitor and generate process dumps when a process has a hung window or unhandled exception.

Process Explorer v16.02 (March 7, 2014) Find out what files, registry keys and other objects processes have open, which DLLs they have loaded, and more. This uniquely powerful utility will even show you who owns each process.

PsShutdown v2.52 (December 4, 2006) Shuts down and optionally reboots a computer.

ZoomIt v4.5 (June 20, 2013) Presentation utility for zooming and drawing on the screen.